I hope this finds you well. This last week brought all the whips and whistles that come with adult life, and due to a lack of proper scheduling (the culpability being set squarely in my court) SharkBrain did not appear on your proverbial radio dial. I’ve been kicking myself for it all week. I just, Hell, ran out of time. I don’t want it to happen ever again. I know better than to promise that it won’t because, let’s just face it, I’ve made enough promises and wide-sweeping statements in my life that haven’t allowed for the imperfection of time and schedules. I know these haunt me mercilessly and needlessly.

I’ve been told that I need to loosen up. To go easier on myself. Then the other side of my dark spirit calls attention to the countless leagues of great expectations, set upon my shoulders from lifetimes ago in my youth, before I set out from the mining town to the big city. How Dickensian. To hold your life to a narrative that’s predetermined, will only give hemorrhoids, sleepless nights, and countless.bitter pillow talks to yourself about the roads not taken.

Good God man. That will sap you. Many nights I’ve taken my past selves out to the metaphorical woodshed for a good beating. And many was the morning afterward where I cracked upon waking like a walnut shell under a large muddied boot. Made useless, ruined before getting out of bed by the tarnished stain of ill will I secretly (and sometimes not so secretly) held for myself. It’s a compromised constitution I force myself to face the world with. It’s not only debilitating toward my artistry, but to a manageable life. It’s an insidious disease. Thankfully, I believe there are cures for this disease.

The cures for me have been to get out of my head, physically and psychologically. The physical aspect is just to make sure I run my ass off. I try for 3 miles a day. I’m happiest when I get them. Something about the road under my feet and the delightfully simple goal pushes the myriad of noises to the background. They may still be there yammering away in my head, but they’re behind frosted glass, so their voices muffle and I can’t make out their faces of terror as clearly. My body begins to make the serotonin it’s in desperate need of. I don’t always feel amazing, but I just feel good.

The second form of attack against the darkness is talking to people. Getting away from the turnstile conversations that go round and round in my aching brain. Getting into someone else’s perspective. That’s what a lot of these SharkBrain talks have done for me. They’ve shown me that I’m not alone in my fears and weaknesses. They’ve shown me I’m not the only one with certain insecurities, certain desperate voices rattling around like old ghosts on chains in the confines of cerebra. These conversations have shown me others who’ve gotten past my current hurdles, their stories guide me to my next step. 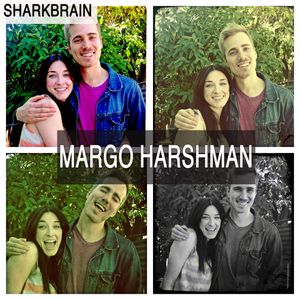 Margo Harshman is the guest this week on SharkBrain. She’s a phenomenal actor with an inspiring outlook on art, work, and life. I only wish I had her as a friend earlier in my career to help advise me against overwrought tension and desperation. But people come into your life at the appointed time, at least that’s what I hold to be true.

But returning to the negative self speech. It’s taken me so long to get past simple disempowering beliefs, I sometimes feel like the artistic equivalent of Rip Van Winkle. That I’m finally starting to rise above these petty ropes that bound me. I’m grateful to those of you who’ve helped me through. Some of you know who you are and yet some don’t. Anyone who’s come up to me after the show to take the time to tell me how much they’ve enjoyed my music, anyone who’s written me an email about my work, who’ve listened to the records, the podcast, or the vlogs, or the movies. I thank you. Fall is upon us in the best of ways and it’s meant to spark something ancient and novel in the same breath. Let’s face it with the wisdom of the ages and the warm curiosity of children.

Be Well my friends,